Lumbini is a 10-hour drive from Kathmandu and a 20-minute drive from Bhairahawa. The closest airport is Gautam Buddha Airport at Bhairahawa, with flights to and from Kathmandu. The India border town of Sonauli in Maharajganj district is 1 hour drive from Lumbini and Nautanwa railway station in India is just a few kilometers away. The nearest big city is Gorakhpur, which is about 100 km and is 4 hours drive from Lumbini. Lumbini is 4.8 km (3 mi) in length and 1.6 km (1.0 mi) in width. The holy site of Lumbini is bordered by a large monastic zone in which only monasteries can be built, no shops, hotels or restaurants. The West Monastic Zone of Lumbini has some incredible architecture displayed in the 14 monasteries here, and most of them are open for visitors.

One of the most ancient Buddhist Temples in Lumbini, which is also a UNESCO World Heritage Site, Maya Devi Temple is one of the most well-known temples which are known as the birthplace of Gautam Buddha. The temple is situated in the middle of the park grounds called Lumbini Development Zone, its continuous developments making it a must-visit attraction. Maya Devi Temple is located right next to the sacred pool called Pushkarini and a sacred garden. This temple marks the spot where Maya Devi gave birth to Gautam Buddha and the archaeological remains of this place date back to the time of Ashoka. 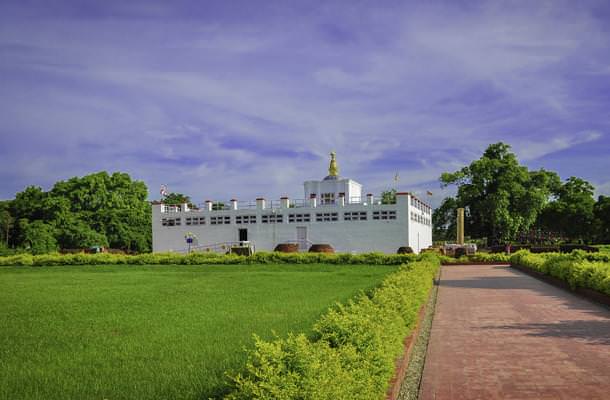 The Bodhi Tree in Lumbini is located in the premises of the Maya Devi Temple complex right next to the shrine on the banks of the serene Maya Devi Pond. Buddhist monks often sit under the tree meditating and chanting spiritual scripts. The tree is an age-old Peepal tree or Ficus Religiosa clad in colourful prayer flags, Locals believe that wishes made while tying a colourful prayer flag are often granted. 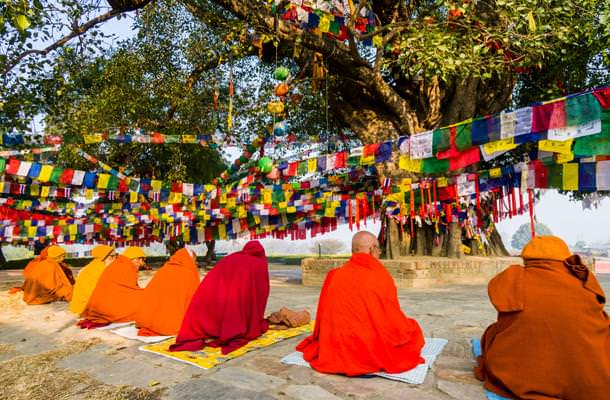 Located right in front of the Maya Devi Temple in Lumbini, Maya Devi Pond is a square-shaped structure with steps all around to ascend to the water level. Also known as Puskarini, this is where Gautama Buddha's mother - Maya Devi - used to bathe. In fact, Lord Buddha's first bathing was done in this pond. A grand temple now takes the location where Buddha was born, and the Maya Devi pond is located right in front of the shrine. On special occasions, the steps around the pond are illuminated with oil lamps after sundown to worship the sacred place. 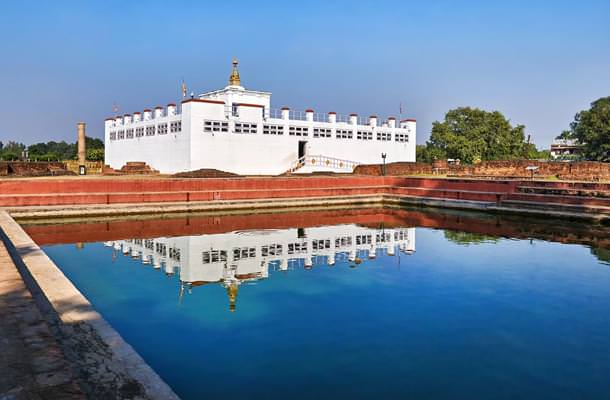 Emperor Ashoka built four stupas and stone pillar during his visit to Lumbini. 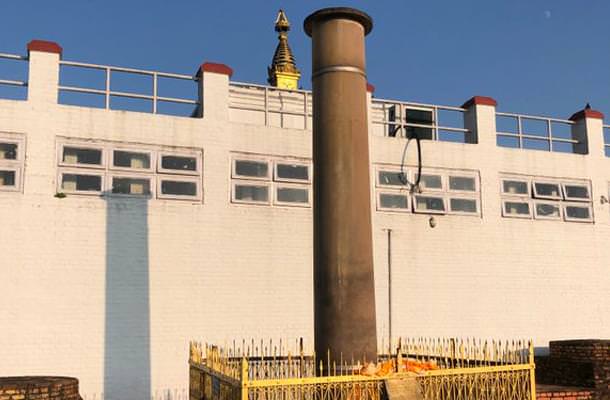 Japan Peace Stupa, also known as World Peace Pagoda is an early 21st Century monument - a symbol of peace and a famous tourist attraction in Lumbini. Located outside the main compound, the structure is a glorious stupa with traditional pagoda style architecture. Constructed by Japanese Buddhist at a cost of US million, the monument is coloured white with a golden buddha statue. The majestic structure has a dome in the centre that can be reached by climbing one of the two flights of stairs leading to it. On the second level, there's a corridor encircling the dome. The Symbol of Peace is open all days of the week for one and all to visit, explore, learn and get inspired to walk the path of non-violence and to live life in unity, which is a necessity in the world today. Located inside the UNESCO World Heritage Site of Sacred Garden Area, Lumbini Museum displays about 12000 artifacts including religious manuscripts, metal sculptures, Terra cottas, coins from Maurya and Khusana dynasty and stamps from all over the world depicting Lumbini. 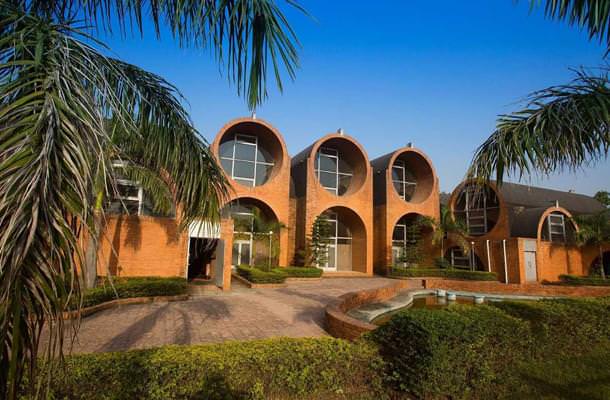 Royal Thai Monastery in Lumbini is an imposing and stunning wat-style (Thai Monastery style) monastery dedicated to Buddhist practices. The gleaming building is constructed from white marble and the blue-roofed meditation centre close by are an example of a fine architectural style. The beautiful designs and carving on the temple wall makes this place a must-visit. 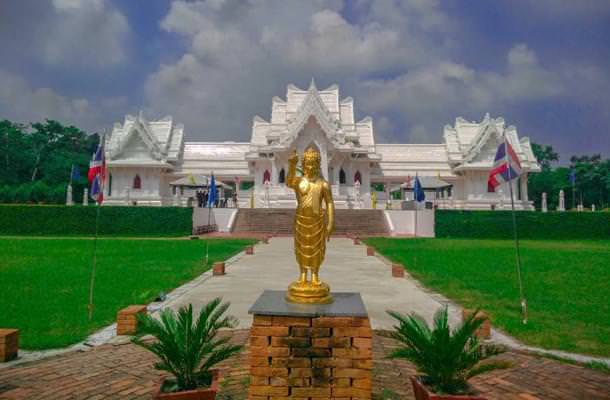 Dharma Swami Maharaja Buddha Vihar is a Buddhist Gompa belonging to the Sakyapa order. It was established by His Eminence Chogya Trichen Rinpoche. The immense peace and tranquility of the site makes it a perfect place for meditation and quiet introspection. Every day, Tara Pooja is performed by the 600 monks residing in the monastery. 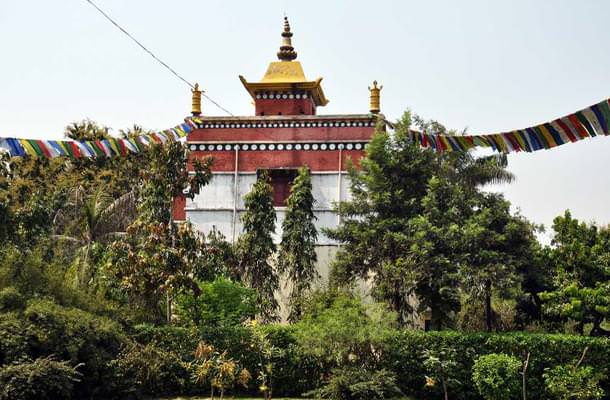 Also known as Sri Lanka Temple, the monastery is a beautiful Sri Lankan Buddhist establishment that gives insights into the life of Gautama Buddha and its importance in the region. The grand monastery holds several important religious events and practices, especially those followed in Sri Lanka. 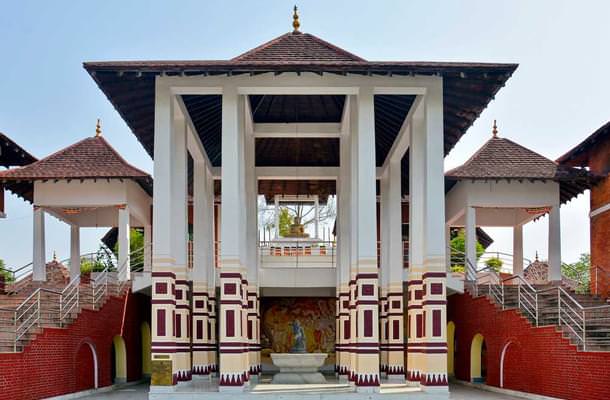 Myanmar Golden Temple in Lumbini is the oldest structure of the city. Built in Burmese style of architecture, the temple is dedicated to Lord Buddha. The impressive corncob-shaped shikhara, styled after the temples of Bagan gives a regal look to the whole structure. There are three prayer halls and a Lokamani Pula Pagoda inside the building. 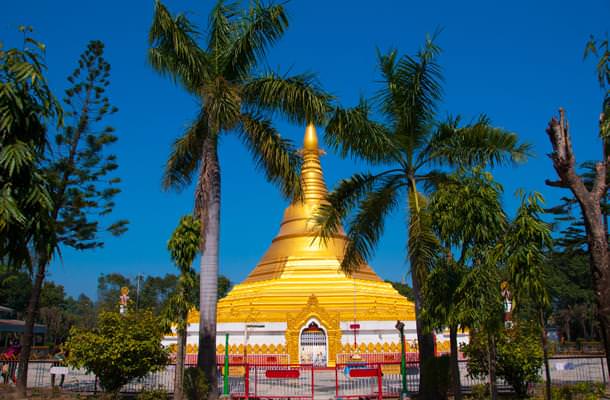 Zhong Hua Chinese Buddhist Monastery, popularly known as the China Temple is an elegant Buddhist Monastery in Lumbini. The impressive structure is built in a pagoda-style of architecture and resembles the look of the famous forbidden city of China. As one enters, the perfectly manicured internal courtyard fills the heart with peace and joy. 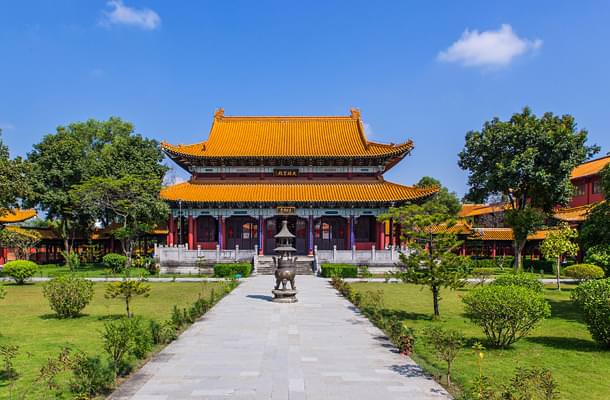 Cambodian Monastery in Lumbini is an amalgamation of colorful fantasy and spiritual forces making it one of the most fascinating temples in the region. Built in a architectural design matching the famous Angkor Wat, the charming monastery is surrounded by a square railing, each having four 50m green snakes. The large compound has an outer wall covered with beautiful and intricate designs. 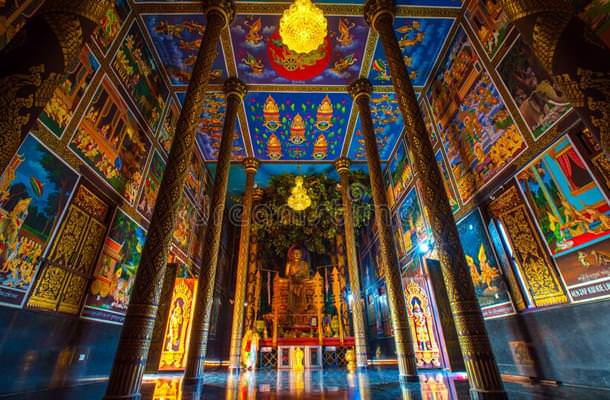 Dae Sung Shakya Sa, popularly known as the Korean Temple, is a Buddhist Monastery in Lumbini. The impressive structure is built in a Korean style of architecture and has colourful murals on the ceiling. It even offers community sleeping area as well as three meals a day to visitors for a few days at a minimal cost of NOR 500 per day. Meditating in the courtyard full of monks and pilgrims is a peaceful and refreshing experience. Located at a distance of 24 km from Lumbini, Tilaurakot houses remains of Kapilavastu and is considered to be the place where Lord Gautama Buddha spent 29 years if his life. Its unearthing is marked as a significant event that reveals the historical life of Gautama Buddha. 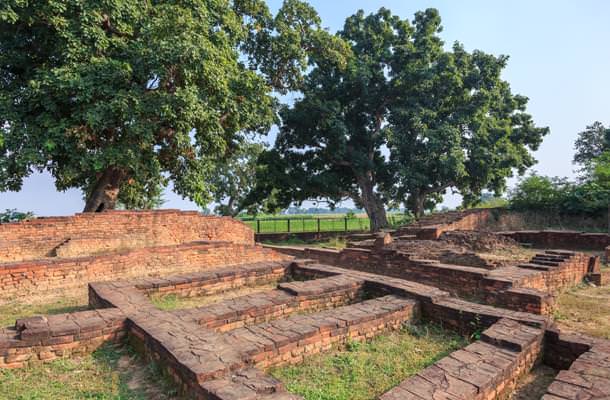 Lumbini complex is divided into three areas: the Sacred Garden, the Monastic Zone and the Cultural Center and New Lumbini Village. The Sacred Garden remains the epicenter of the Lumbini area and consists of the birthplace of Buddha and other monuments of archaeological and spiritual importance such as the Mayadevi Temple, the Ashoka Pillar, the Marker Stone, the Nativity Sculpture, Puskarini Sacred Pond and other structural ruins of Buddhist stupas and viharas. The Monastic Zone, spanning an area of 1 square mile is divided into two zones: the East Monastic Zone which represents Theravada school of Buddhism and the West Monastic Zone which represents Mahayana and Vajrayana school of Buddhism, with their respective monasteries on the either side of a long pedestrian walkway and canal. Marking the monastic spot as a sacred pilgrimage site, many countries have established Buddhist stupas and monasteries in the monastic zone with their unique historical, cultural and spiritual designs. The Cultural Center and New Lumbini Village comprises Lumbini Museum, Lumbini International Research Institute, World Peace Pagoda of Japan, Lumbini Crane Sanctuary and other administrative offices

NANSC presents the above attractions to visit and greet the Buddhist era in Lumbini. The Reason Why Choose Us?

NANSC is situated at Corporate Hub vicinity on Highway access based in Bhairahawa such a way that BAT BATENI international Mall is 500 meter step ahead and AQUA Water park is 700 meter step ahead from Hotel. Bhairahawa boarder to India access is just 1 Km far away. Buddha International Airport is 2.5 km away from NANSC hotel. Buddhist travelers and spectators needs to travel only 15 km from Hotel to see MAYA DEVI Temple.